I’ve heard it said that the highest level of everything has a dark side. Whether you’re talking about athletics, business, government or the horse industry. The greed that we have as people is a sad thing to witness.To achieve something and show the world what we are is important to us and to do so leads lots of people to running over someone or something else to accomplish something. It might be winning a championship or gaining wealth. Trying to gain or achieve fame and fortune can be an ugly thing to witness. 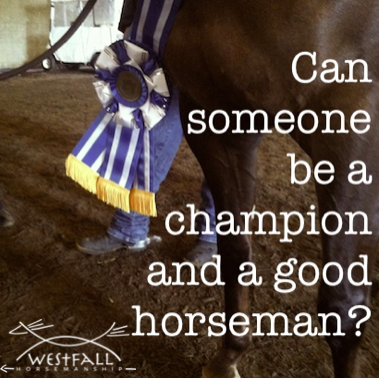 I’m in the horse industry so that is where I see it the most. It could be someone trying to get someone else’s client to send them their horses or it could be just the general abuse of the animals in order to win. It could be a popular clinician taking a lesser known clinicians idea and putting it on their television show and claiming they came up with it. The list goes on and on. Can someone be a champion and a good horseman? I think the answer is yes but the championships won’t come as often and it’s a fine line to walk.